The Senator answered the call to public service at an early age by serving as an assistant to Philadelphia City Councilwoman Joan Krajewski from 1986-1989. She later worked as a Senior Executive Assistant to State Treasurer Catherine Baker Knoll from 1989-1992. Her commitment to working families led to the position of Business Representative for the United Food and Commercial Workers Union Local 1776 in 1992.

In 1994, Senator Tartaglione became the fifth woman in state history to win election to the State Senate and in 2010 became the first woman to serve in Senate Democratic Leadership when she was elected Caucus Secretary. Now in her seventh term, she serves as Democratic Chairwoman of the Senate Labor and Industry Committee, and serves on the Banking and Insurance, Consumer Protection and Professional Licensure, and Law and Justice standing committees in the Senate, as well as the bicameral Legislative Budget and Finance Committee and the Senate Committee on Ethics and Official Conduct. She is a member of the Accessibility Advisory Board within the Department of Labor and Industry, the Election Law Advisory Board under the Joint State Government Commission and the Board of Trustees of Temple University and serves as chairwoman of the Senate Philadelphia Delegation.

Senator Tartaglione is widely known as the Senate’s leading advocate for working families, fair wages, and people with disabilities. She authored Pennsylvania’s landmark 2006 minimum wage increase and was instrumental in the establishment of the state Office for People with Disabilities.

She was the principal sponsor of successful legislation protecting healthcare employees from the dangerous practice of mandatory overtime, as well as legislation that created the Pennsylvania Center for Health Careers. The Senator also authored legislation to provide the Commonwealth with a focus for developing strategies to ensure an ample complement of quality healthcare workers for the short-term and long-term. She continues to be a leading advocate for safe nurse staffing levels.

Senator Tartaglione has acted to safeguard and support the Pennsylvania State Police. During the 2011-2012 session, her legislation was enacted to allocate additional funding to the PSP, allowing the department to reinforce its dwindling complement of troopers.

The senator’s advocacy for safe work environments extends to Pennsylvania’s public transit systems. She is the primary sponsor of legislation that strengthens the protections for transit workers from physical assaults. She has introduced legislation to provide OSHA protections similar to those enjoyed by private-sector employees to all state and local public employees, including school district and transportation authority employees.

As the Democratic Chairwoman of the Senate Labor & Industry Committee, she has worked closely with the Department to modernize Pennsylvania’s aging unemployment compensation system and to help the Department provide jobless benefits to workers who have been displaced by the COVID-19 pandemic. She has helped thousands of unemployed workers to resolve delays or discrepancies in their benefits.

Despite the pandemic-related challenges, Senator Tartaglione continues to work diligently to raise Pennsylvania’s minimum wage, achieve gender-wage equality, strengthen wage payment and collection laws, and advocate for workers and military veterans with disabilities. She has partnered with Governor Tom Wolf to propose legislation to raise the statewide minimum wage to $12 this year and set us on course for a $15 minimum wage. She has introduced bills to prevent employers from taking a cut of tipped workers’ earnings and to empower workers with new tools to challenge wage non-payment.

Senator Tartaglione is the primary sponsor of bills that would establish a state civil service hiring preference for people with disabilities and would provide real estate tax relief for disabled veterans. She has introduced legislation to require contractors to demonstrate to the Attorney General that they carry worker’s compensation insurance coverage.

Continuing her focus on issues that are important to senior citizens, children, and working families, Senator Tartaglione has proudly supported legislation to:

Senator Tartaglione has served as a member of Pennsylvania’s Public Television Network Commission, Intra-Governmental Council on Long Term Care, Task Force for the Protection of Older Pennsylvanians, Joint Select Committee to Investigate the Financial Integrity and Stability of the State Workmen’s Insurance Fund, Children’s Trust Fund Board, and the Pennsylvania Council on the Arts.

As a member of both the Joint Select Committee on Election Issues and the Governor’s Task Force on Voting Modernization, the Senator has been at the forefront of efforts to reform Pennsylvania’s voting system. She has also been a member of the Firefighters and Emergency Services and the Port Legislative caucuses, the Delaware River Basin Commission, the Accessibility Advisory Board within the PA Department of Labor and Industry, the State Unemployment Compensation Advisory Council, and the Training America’s Teachers Commission.

Locally, Senator Tartaglione has served as a member of many boards and committees. She is a member of the Board of Trustees of Temple University and Temple University Health System Episcopal Campus, and has served on the boards of Magee Rehabilitation Hospital, PATH (People Acting to Help), the Empowerment Zone Board, Impact Services Corporation, the President’s Advisory Council of the American Street Corridor Business Association, the PenJerDel “Rebuild the Delaware Valley” Steering Committee, and the Buoniconti Fund to Cure Paralysis, Inc.

She has been awarded the prestigious John F. Kennedy Memorial Award by the Kennedy Foundation for her tireless support of Mental Health/Mental Disability Programs. It is one of just three awards named in honor of President Kennedy that have been endorsed by his family. In 2012, Senator Tartaglione was named Legislator of the Year by Pennsylvania Industries for the Blind and Handicapped (PIBH). Both the Retired Police, Firemen and Prison Guard Association of Philadelphia and the Philadelphia Area Project on Occupational Safety and Health (PHILAPOSH) have named her Woman of the Year, and she has been selected as the recipient of the Firefighters Friend Award by the Philadelphia Firefighters and Paramedics Union Local No. 22, as well as Public Servant of the Year by the Philadelphia Public Record.

The senator is a recipient of the Temple University Health System Episcopal Campus Health Care Visionary Award and the Organized Labor Supports American Veterans Public Service Award. In 2019, Marsy’s Law for PA presented the Senator with the Guardian of Victims’ Rights Award. In 2020, Senator Tartaglione was presented with the Appreciation Award of the Drug & Alcohol Service Providers of Pennsylvania (DASPOP).

The Philadelphia lawmaker has been the recipient of the Jo Cooper Foundation for Family Unity award from Congregation Beth Solomon Synagogue and Community Center, the First Annual Profile In Courage award from Women Making a Difference Inc., the Rosa Parks Award presented by the Honorable Louise Bishop, the Tuttleman Award for Excellence in Healthcare, the Magee Leadership Award, the United Food and Commercial Workers Minority Coalition’s Legislator of the Year Award, the Philadelphia Veterans Multi-Service and Education Center and Organized Labor Supports America’s Veterans’ 2005 Public Service Award, the Service Employees International Union’s Thomas F. Zuber Award for Patient Safety, the John O’Donnell Friend of Frankford Boys Club Award, the Columbus Civic Association Achievement Award, the Working Woman of the Year Award by the Coalition of Labor Union Women, and the Achievement Award from the Concerned Black Leaders of Lower Tioga-Hunting Park. She has also been recognized by the 2nd Police District Advisory Council and the Juniata Boys and Girls Club for her outstanding and continuing support.

She is cited in the Italian Americans of the Twentieth Century and is a member of the Ecumenical Hospitaller Order of St. John Knights of Malta. 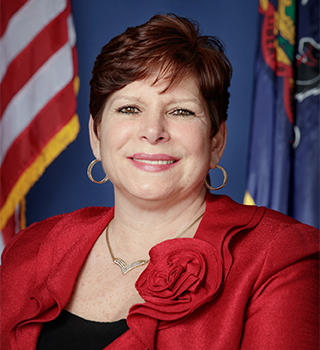