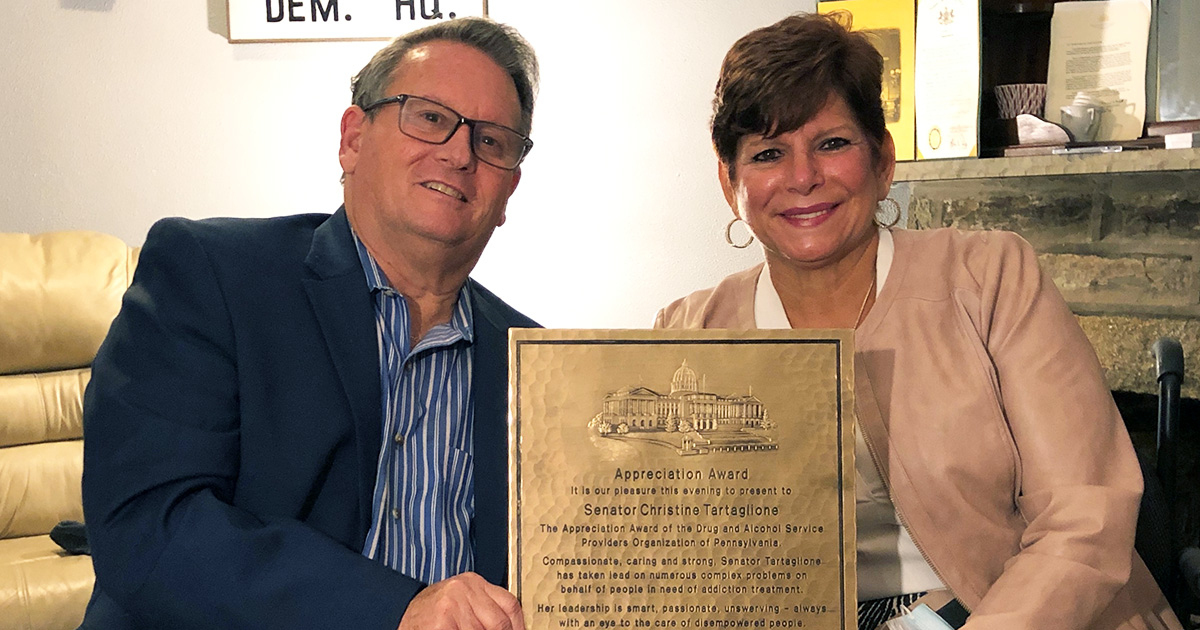 Philadelphia, PA –  October 23, 2020 –  The Drug & Alcohol Service Providers Organization of Pennsylvania (DASPOP) have named State Senator Christine Tartaglione as the recipient of its Appreciation Award during the organization’s annual Celebration of Recovery.

Senator Tartaglione also delivered a stirring keynote address during the event, which was held via video conferencing in compliance with COVID-19 mitigation guidelines. The Senator detailed publicly for the first time in her 25-year career her ongoing recovery from alcoholism.

“Discussing such personal matters in a public setting can be awkward or difficult, but it also brings me great comfort,” Senator Tartaglione said. “It’s like lifting a heavy weight off my shoulders. It’s a great relief knowing that I can be forthright about the challenges I face, and I don’t have to pretend like everything is fine even though I know there is a problem.”

The Senator said she has avoided drinking alcohol for the last 17 years. Robert Dellavella, the Chief Executive Officer of Self-Help Movement Inc. in Northeast Philadelphia, presented the award to the Senator during a small gathering of her close friends.

Addressing the many assembled treatment advocates, Senator Tartaglione said, “Individuals and organizations like yours are doing God’s work and are saving human lives. You are healing people physically and spiritually.”

Of her personal story, the Senator added, “I sincerely hope that my message about vulnerability, honesty, and recovery resonates with the many, many people who, like me, struggle with alcohol or drugs. I hope my story will show others that there is a path forward in sobriety and that a fulfilling life awaits them on the other side.”

Senator Tartaglione has advocated strongly in the General Assembly for expanding treatment options, access, and insurance coverage for people who suffer with drug- and alcohol-related illnesses.

Also during the Celebration of Recovery, DASPOP presented Doug Tieman, CEO of Caron Treatment Centers, with its Lifetime Achievement Award. Mr. Tieman has announced his retirement after a long and distinguished career in the drug and alcohol treatment field.