Philadelphia, Oct. 6, 2011— The Senate Democratic Policy Committee today heard from various stakeholders in the effort to modernize Pennsylvania’s liquor sales system in a way that will keep up consumer demand while continuing prevention of abuse and underage drinking. 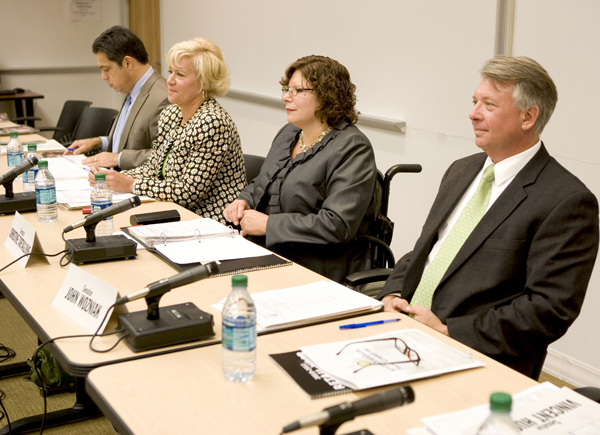 “Pennsylvania has a unique system that returns money to state taxpayers and curbs the profit incentive for sales,” said Sen. Lisa Boscola, who chairs the policy committee. “The committee wanted to know how we can keep the controls in place while accommodating changing consumer preferences.”

The committee convened at Congeso de Latinos Unidos, in North Philadelphia, where representatives of liquor store employees, the state Liquor Control Board, and local clergy discussed various proposals for updating the system.

The Liquor Control Board operates more than 600 retail stores in Pennsylvania, staffed by employees whose primary concerns are preventing underage drinking and alcohol abuse.  The LCB also oversees thousands of licensees, like bars, restaurants and vineyards.

“The system we have in Pennsylvania has numerous benefits to taxpayers and consumers,” Tartaglione said. “Employees of the stores make good wages, which bolsters the local economy, and they are not motivated to sell more to make that wage. That’s an important part of our goal to promote responsible, legal consumption.”

Liquor Control Board CEO Joe Conti explained proposals for modernizing the liquor system that include giving the LCB more flexibility in purchasing and pricing that would help create more choice for consumers and return for taxpayers.

“We have a long list of ideas that could make the system more consumer friendly, efficient and profitable,” Conti said. “We need the legislature to give us the flexibility to implement them.”

Tartaglione said it was important to also hear from local religious leaders to address their concerns about the possibility that more convenience could lead to more abuse.

Rev. Bonnie Camarda, President of the Latino Clergy of Philadelphia, said religious leaders are opposed to Sunday sales, but have been able to accept it as something customers want.  But expanding Sunday hours, or turning the liquor system over to private enterprise is a major concern.

“My biggest fear is that on every corner of North Philadelphia there’s going to be a liquor store,”Camarda said. “I don’t know what would happen in this community.”

Senate Democratic Leader Jay Costa, of Allegheny County said the main reason he traveled to Philadelphia for the hearing was getting local perspective.

“With the proposals being put forth this session, it’s very important that we gather as much information as possible. We must very carefully assess the impact privatization will have on all communities,”  Sen. Jay Costa. “We’re in North Philadelphia today because the concerns here are probably not the same as they are in the suburbs or in rural counties. We want to make sure we hear as many perspectives as possible.”

Tartaglione, who hosted the hearing in her Senate district, said she invited Camarda because she knows that treating drug and alcohol addiction are a primary concern of many community groups.

“We’re all aware of the effect alcohol consumption has on our neighborhoods,” Tartaglione said. “That’s probably the most important reason to keep tight controls on sales, even if we relax rules about hours and pricing.”

Many of the liquor restrictions that consumers find inconvenient are not produced by the LCB, but are enshrined in decades-old state law, officials said.

LCB officials asked for relaxation of the liquor code to allow for more of its stores to be open on Sunday and the ability to adopt modern Consumer Relations Marketing that could be tailored toward regular customers.

The push toward privatizing the liquor system, rather than modernizing it, would cost Pennsylvania jobs at a time when unemployment is on the rise would affect thousands of workers and all taxpayers, said Wendell Young IV, President of the United Food and Commercial Workers Union.

“Privatization will result in 5,000 Pennsylvanians being fired so that a few well-connected entrepreneurs can profit,” Young said. “This makes no sense considering that the PLCB is profitable, provides good jobs and all the money stays here in Pennsylvania.”

Boscola said the hearing produced valuable information about the future direction of the state’s liquor system.