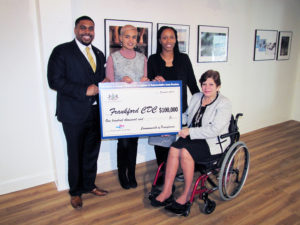 Frankford Pause is an innovative land reuse project conceived in 2014 by the FCDC in collaboration with the Philadelphia City Planning Commission’s Destination Frankford arts-based initiative. The vision is to create a unique outdoor venue as a hub of community activity with flexible space for social gatherings, public performances, art displays and casual reflection. The pause park is next to FCDC’s headquarters in the recently renovated Daral Building at 4667 Paul St.

“Frankford is a threatened neighborhood in many ways due to socio-economic factors such as the decline of traditional manufacturing industries and loss of family-sustaining jobs,” Senator Tartaglione said. “But the neighborhood is filled with opportunities for investment and growth thanks to the commitment of the people who live and work there. I’m thrilled to contribute to its renaissance. The pause park will beautify Frankford Avenue, bring people together for community events and attract new businesses to the area.”

“The real hope is that we get people to reinvest around Frankford Avenue and bring people back to the avenue,” Washington said. “Over the years, Frankford’s been neglected. Right now I’d call it an emerging neighborhood. It sits on the cusp of gentrifying neighborhoods just to the south of us. Frankford has a real opportunity to stabilize the neighborhood by bringing in small businesses and creating jobs so people from the neighborhood can really take advantage and stay in the neighborhood.”

The park project is part of FCDC’s broader revitalization effort known as Reimagining Margaret & Orthodox, which includes business façade improvements, streetscaping and reducing blight. Frankford Pause is the former site of a diner that caught fire and was demolished years ago, Washington said. People then began using it as an illegal dumping ground.

The City of Philadelphia took ownership of the site. FCDC leases it from the Department of Public Property. 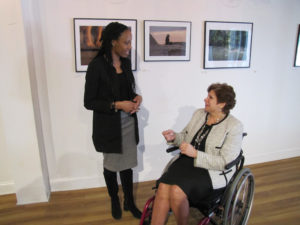 Washington and Tartaglione chat about the new Frankford Pause park

Late last year, FCDC completed a preliminary construction phase including the installation of planter beds, planter decks and a performance stage, as well as distinctive pink strips on the walls of adjoining buildings. The final build will include overhead lighting that will synchronize with environmental sounds such as passing Elevated trains.

“Kids were really engaged and the ladies from the garden club were really glad to teach kids about gardening,” Washington said. “The kids were very excited about that.”

Next spring, FCDC will launch a pilot program of events to study how people from the community want to use and interact with the space.