Officer Gary Skerski would be memorialized on a Frankford bridge near the site of the 2006 shooting that claimed his life. 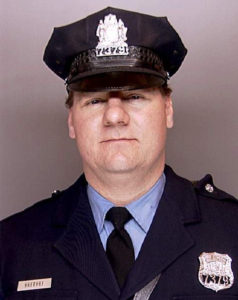 House Bill 1778 would designate a portion of Castor Avenue (also known as State Route 1005) spanning the Frankford Creek as the Officer Gary Frank Skerski Memorial Bridge. Officer Skerski was shot and killed in the line of duty on May 8, 2006, while responding to an armed robbery of Pat’s Café, a popular local tavern near the bridge site.

“Officer Skerski showed us every day the many great things that police officers do within communities,” Sen. Tartaglione said from the Senate floor. “He embodied the mission ‘to protect and serve.’ In the aftermath of the fatal shooting, patrons who were inside Pat’s Café that night credited Officer Skerski for protecting them – for literally saving their lives. Likewise, Officer Skerski’s efforts on community relations set a shining example that remains as relevant today as it was then.”

More than a dozen patrons and employees were inside Pat’s that evening when a robber armed with a sawed-off shotgun and semiautomatic handgun invaded the business, announced a robbery and threatened to shoot anyone who disobeyed his commands. One of the victims managed to call 911 from a cell phone. Officer Skerski and his partner were on duty nearby and responded to the emergency call for help.

Officer Skerski was a 16-year veteran of the police force assigned to the 15th district. He was survived by his wife Anne, son Robert, daughter Nicole, parents Chester and Mary, sister Jacqueline and brother Robert. Although he served primarily as the designated Community Relations Officer for the 15th district, Skerski was working overtime that night to assist his colleagues in their patrol duties.

“He was a beloved son, brother, husband and father,” Sen. Tartaglione said. “And he was an equally beloved member of his community. He served a vital role as the face of the Philadelphia Police Department in neighborhoods like Frankford, Mayfair, Tacony, Wissinoming and Bridesburg. He cultivated relationships with local schools, churches and civic associations while helping to ensure that the community recognized and honored police officers who were doing great work in those neighborhoods.”

State Rep. Jason Dawkins (D-179th dist.) was the primary sponsor of the bill that passed the Pennsylvania House, 187-0, in October. The Senate voted, 49-0, in favor of the bill today. The legislation will be forwarded to Gov. Tom Wolf for his consideration.